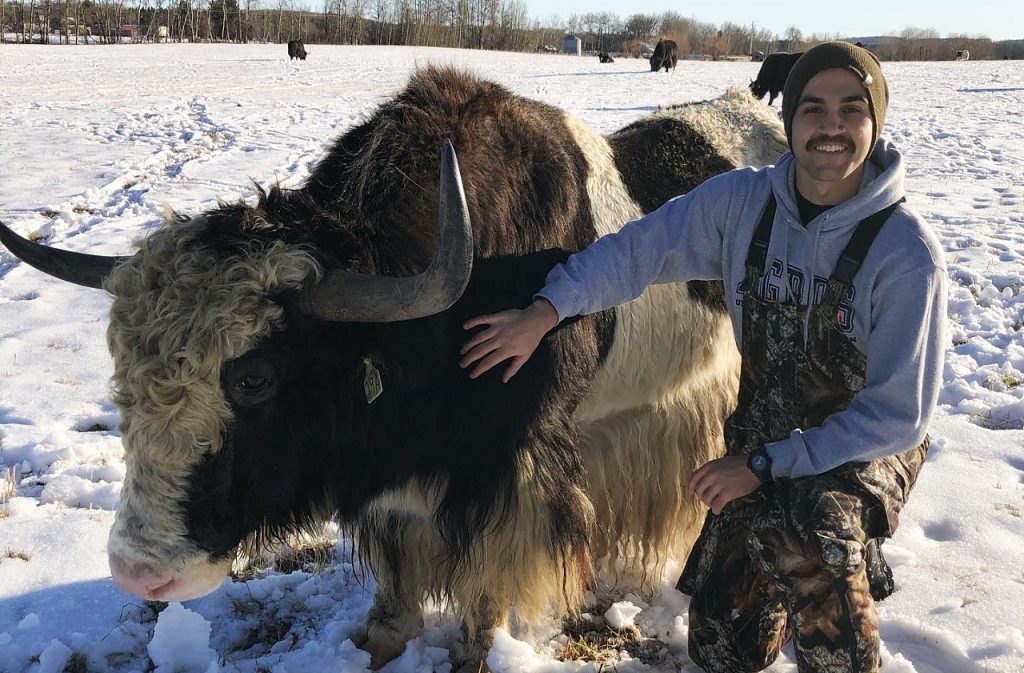 Etienne de Jongh spent his internship last fall at a yak farm near Rimbey, Alta. The third-year animal health student and aspiring vet says the experience helped him better understand the value of working alongside a livestock producer. (Photo: Supplied)

For most University of Alberta students, Reading Week is a break from the books, spent lounging around the house in pyjamas or on the ski hill.

For Faith Jensen, it’s about happily probing the guts of a dead cow, thanks to a U of A program that is scattering 118 students around Alberta Feb. 19-21 for hands-on experience in agricultural careers. 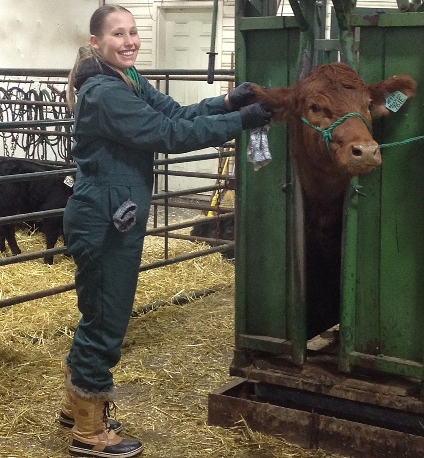 Donning everything from coveralls and rubber boots to hair nets and work gloves, students like Jensen voluntarily work, with no pay, for three days with agriculture-related industries and businesses including breweries, cannabis facilities, meat and dairy farms, vet clinics and food companies, as part of the Animal Science Mini-Internship Program.

“Lots of people think Reading Week is ski week, but we have students getting on-the-job experience for no classroom credit, and a very positive outcome,” said poultry professor Frank Robinson, who helped create the internship program in the Faculty of Agricultural, Life & Environmental Sciences.

A partnership between the faculty and the U of A’s Career Centre, the program has placed 240 students studying animal, food, plant and environmental sciences since it started in 2016. It runs twice a year, during the university’s week-long term breaks in fall and winter.

Under the guidance of their workplace hosts, students have boxed vegetables, distilled spirits, made spice blends, gathered eggs, herded cattle and helped with food safety or marketing campaigns, all the while learning how ag-related industries operate and what career possibilities they offer.

“There’s a lot of opportunity students aren’t aware of and they may not know where to start, so this program opens the door for them to take that first step by making contacts in the workplace. That’s huge,” said Robinson.

Jensen, a fourth-year animal science student, has done five internships over the years including working in horse stables in Leduc and Sturgeon counties, and with beef cattle operations in Millet and Westlock.

As someone who grew up in Edmonton, she knew she’d have a better shot at getting into veterinary school if she had some boots-on-the-ground experience with livestock. But she got more than that.

“I thought the internship would be a lot more about asking questions and watching how things were done, so when I got to do the work, it took it to a whole new level,” she said.

In fact, it was her elbow-deep post-mortem on a cow, under the guidance of an Airdrie-area veterinarian, that got her thinking about specializing in livestock medicine rather than small animals.

“I thought since I had no experience with large animals that it was out of the question, but the internship boosted my confidence and made me realize that with hard work and dedication I could do it.”

Jensen also heard concerns from the beef producers she was working for about the lack of large-animal vets.

And if she doesn’t get a coveted spot in vet school, she’s got a better idea of what she’d do instead, after touring a Westlock feedmill during one of her placements.

“As a cattle nutritionist I could have the same, if not a greater, effect on cattle health. There’s lots of opportunity out there for me.”

The Reading Week program is a valuable bridge for an emerging demographic of female, urban students like Jensen who are enrolling in animal and food science, and will be needed to fill job shortages in ag-related industries, Robinson said.

“We have very few students from farms, so we have to find a way to help them be competitive in the job market.”

While one in 35 Canadian jobs goes unfilled, the ratio in agriculture is one in 11, he noted. Labour shortages have doubled over the last decade and are projected to double again to 113,800 positions before 2025. Canada’s agriculture sector reported $2.9 billion in lost sales in 2018 because of unfilled vacancies—an increase from $1.5 billion in 2014, according to the Conference Board of Canada.

Demand for skilled workers is especially high in the dairy cattle and poultry nutrition industries, and the need is growing in fast-developing fields like food safety and animal welfare, he added.

Bringing U of A students onto her egg farm opens their eyes to what’s involved in commercial agriculture and hopefully sparks their interest in related careers, said Susan Schafers, a large-scale producer near Stony Plain.

During their placements with her, students vaccinate chickens, gather eggs and see first-hand how their food is produced. Through multiple placements with different ag operations, they can eventually get enough basic knowledge to carry into an ag-related career, she said.

“They get to know how a feedlot or a commercial operation works, which means the industry—which has never been seen as very sexy—gets well-rounded kids who are excited about agriculture. And that hopefully can open doors for them and for us as producers.”

Etienne de Jongh’s internship at a yak farm near Rimbey last fall helped the third-year animal health student and aspiring vet better understand the value of working alongside a producer.

He grew up in the Whitecourt area tending backyard bees and chickens, but was able to widen his experience with niche species by handling the long-haired bovine and learning about its behaviour from the farmer.

“It’s definitely a new field of production and a new market for Canada. If you’re a vet just coming in to practice but don’t know anything about yaks, farmers have something to teach you—expertise you just can’t get from a textbook,” said de Jongh, who plans to use his next fall term break for another farm placement.

The program’s popularity is growing, Robinson noted. This year, for the first time, graduate students were among those who applied, and three were accepted. Several international students also take part each year.

And none complain about giving up their Reading Week, Robinson said.

“We’ve had success because we’re able to give students what they want—a chance to go and get their hands and feet dirty with some job experience.

“When they get their placements, they tell me, ‘I’m so excited, I can’t wait.’”