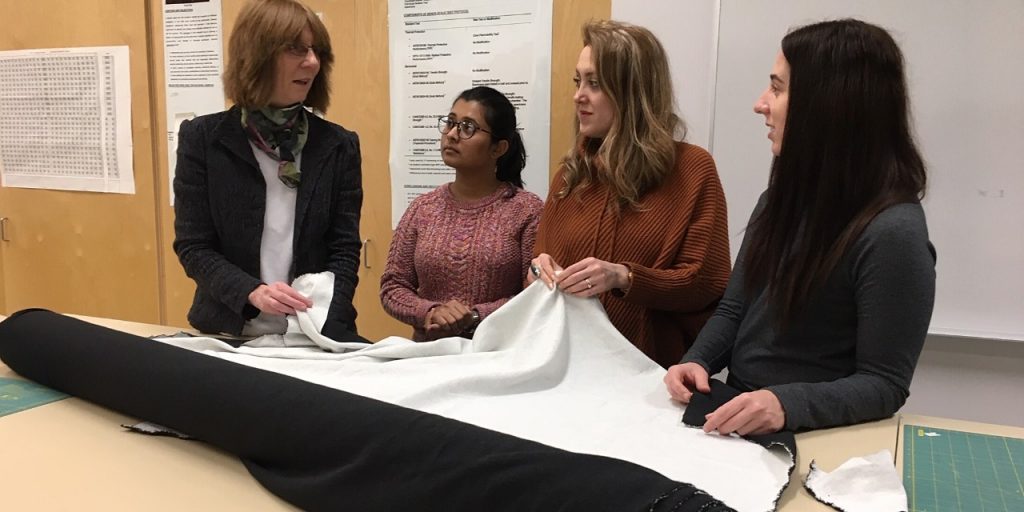 After bulky, ill-fitting coveralls caused her to have some near-misses in her job as a heavy equipment operator, Jess Black decided to take matters into her own hands and create a line of clothing for women working in heavy-duty industries like oil and gas, and construction.

Knowing that active wear is the preferred material worn as base layers on job sites, she set out to create a line that was also safe. While she could handle designing it, she knew that for the garments to be practical, they would also have to be fire-retardant.

She searched for experts to help her and eventually connected with University of Alberta textiles scientist Patricia Dolez and post-doctoral fellow Mahsa Kalantari to bring her idea to life.

The trio now have a first draft of fabric on the cutting table.

Once perfected, the fabric, which is being patented, will be used in a line of base layer leggings and shirts that Black’s business plans to roll out later this year.

It wasn’t easy to find the right formula, said Black, who began looking for a fire-retardant fabric three years ago, only to discover that what she wanted didn’t exist.

“You can’t find material like ours at all. Current active wear has some of the comfort levels, it’s thin and flexible, but it’s not fire-retardant,” she said.

With the support of Quebec textile manufacturers, the U of A team formulated a fire-resistant material from manufactured fibres that provides a snug but moveable fit for women underneath their coveralls.

Men typically prefer a looser fit, but that poses a safety risk for women, Dolez noted.

“When you’re moving around on the job, you need to have good coverage without gaps that expose skin to fire or other hazards.”

“We wanted something fitted, but stretchy,” said Kalantari, who earned a PhD in engineering at the U of A and holds a master’s degree in chemical textile engineering.

The clothing line will let women reduce the layers of protective clothing they need to wear, which also boosts safety.

“Multiple layers are a hazard because they can lead to conditions like heat exhaustion,” said Black, who also works as a first responder.

The soft, flexible black cloth was tested in the U of A’s Protective Clothing and Equipment Research Facility for durability and resistance to fire, heat and bacteria, with more testing to come in the year ahead to improve its qualities.

“We know what we need to work on and we’re finalizing the decisions on how to improve it, but we have a very interesting product so far,” said Dolez.

Textile design is an evolving field and ideas have to move with it, she added.

“We’re starting to realize that one size doesn’t fit all and that we need to take care of the people who are wearing the clothing, to put them into the equation, rather than just the material.”

After the women’s line launches next May, Black expects to roll out similar garments for men, as well as for women who work as first responders and in the military. Both will be marketed online.

Though there’s still work to be done in developing the fabric, Kalantari is excited about helping fill a ground-floor gap as more women move into traditionally male-dominated jobs.

“I’ve always wanted to work on something that’s really needed,” she said. “And these women deserve it—they can still feel fashionable while working.”