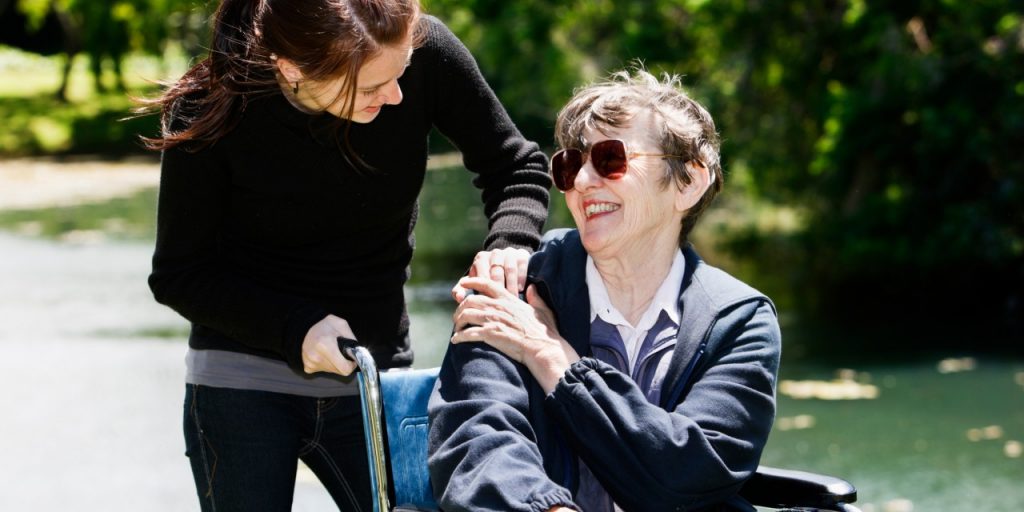 Caring for family members or friends poses challenges to teens’ health, social development and educational prospects, U of A researcher finds.

More than a quarter of Canadians between the ages of 15 and 19 are providing care for friends and family—and it could be limiting their chances in life, according to new University of Alberta research.

Almost 600,000 youths—27 per cent of people in that age group—spend up to 21 hours a week caring for grandparents, parents, siblings, friends or neighbours with challenges resulting from illness, disability or aging, said lead researcher Janet Fast, a U of A family economist who specializes in the economics of aging and the paid and unpaid care work of family members.

“This issue has remained hidden; there’s a tendency to disbelieve that young caregivers exist,” she said.

Drawing on 2012 data from Statistics Canada, the latest available, Fast’s research team showed that young caregivers start early: 42 per cent started when they were younger than age 15, 45 per cent of them were between 15 and 17 and another 13 per cent were 18 to 19 years old.

Because youths stretch themselves too thinly to meet this commitment along with jobs and school, they’re a vulnerable population facing challenges to their health, social development and prospects for higher education, said Fast.

“There needs to be an awareness of what caregiving means to these kids’ life chances. It definitely has long-term potential to limit their ability to move out on their own, to go to school, to do what they really want to do in life,” she added.

The data analysis showed that 61 per cent also have jobs, along with school and caregiving commitments. One in seven said their grades suffered because they fell asleep, couldn’t concentrate or didn’t have time to study. Some chose to drop out of school and three per cent were forced to postpone enrolment in an education or training program.

Among those young caregivers who also hold paid jobs, one in four work 30 or more hours per week and one in three work part-time. Seventeen per cent arrived late to work, had to leave early or took time off to care for a loved one.

Their mental health and social lives may also suffer, the research showed. One in three of the teens reported feeling overwhelmed or irritable, one quarter of them were tired and seven per cent felt depressed. One in three spent less time with friends, while others reported strained relationships or feeling lonely.

Young people may not even realize they are caregivers, said Jamie MacDonald, a U of A human ecology student who analyzed the data and helps care for her mother and grandmother.

“When I started this project, I said to myself, ‘I guess this could apply to me too.’ I’m surprised there’s a label for it because it’s always just been part of life and being a family,” she said.

Now 21, MacDonald, an only child, has been caregiving a few hours a week since she was 13. Despite a full schedule of schoolwork and a part-time job, she spends time visiting her grandmother and helping with yardwork, and she’ll also be caring for her parents as they age.

“I know that will be part of my future and I’m happy to do it,” she said.

In fact, 85 per cent of youths felt that their caregiving duties—including everything from personal care to housework and driving to medical appointments—strengthened their relationships with the people they were caring for.

“They feel part of the family, that they’re contributing, they learn about responsibility and reciprocity. But the problems come when they are overcommitted to care tasks and it interferes with their development. Adolescence is a key time psychologically, for learning how to develop their friendships, their social skills, their emotional maturity, and they’re not getting that opportunity,” said Fast.

Lack of those essential skills can follow youths into adulthood and lead to higher stress levels, behavioural problems and poor financial outcomes if they don’t complete high school or post-secondary education.

More awareness of the situation and supports are needed for young caregivers, Fast said.

Some of that support could come from the education system, by recognizing caregivers’ unique needs and offering appropriate mental health supports, tutorial assistance, flexible homework deadlines and student financial aid, Fast suggested. Health professionals can also recognize young caregivers by including them in discussions during medical appointments.

“They are often the most able to answer questions about how their family member is doing at home,” Fast said.

The entire home care system needs to include respite programming that allows young caregivers “time and space to be kids” and help in accessing those resources, she added.

“Even in the private market, there’s a severe shortage of paid home support workers and it is expensive,” she said.

MacDonald considers herself fortunate to have a supportive family and enough resources to successfully juggle her school, job and caregiving, but feels for other youths who aren’t as lucky.

“I’m very much in a good place,” she said. “A lot of (young caregivers) are balancing school and work at a very important time in their lives and their futures could be changed dramatically because of it.